Harness racing is a type of horse racing where the horses race at a specific gait; a trot or a pace. Typically, the horse will be pulling a driver in a sulky (a kind of two-wheeled cart).

In Europe, trot monté is considered a type of harness racing even though a jockey is mounted on the horse. 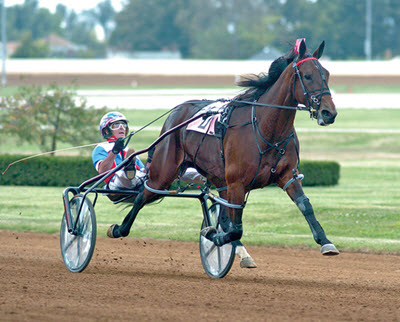 In Europe, harness racing events tend to be more open. Standardbreds are common, but you can also see breeds such as Frech Trotters, Russian Trotters, and even cold-blooded. Some breeds, such as the Orlov Trotters and the Finnhorses, have their own breed-specific races.

Pacing is faster than trotting, and a pacing horse is also less likely to break stride and start galloping compared to a trotting horse. Partly, the reduced risk for breaking stride isn’t because of the pacing itself but because pacers often wear hobbles during races. Hobbles are straps connecting the legs on each of the horse’s sides. Trotting hobbles do exist, but are not common, although there has been an increased interest in them during recent years. In continental Europe, races are conducted exclusively for trotters. In the United Kingdom, races are also held for pacers, and that is also true for some other countries, including the United States, Canada, Australia, and New Zealand.

In the United States, pacing races are much more common than trotter races, with over 80% of all harness races being for pacers.

Examples of important races in the United States and Canda